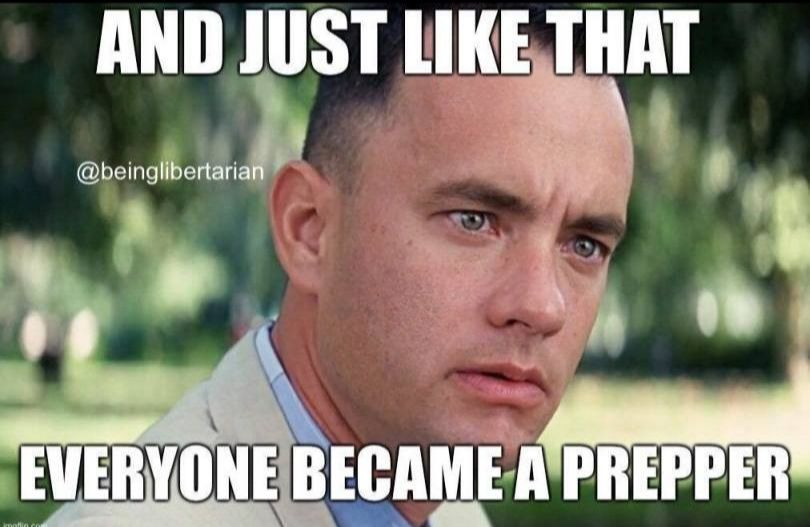 As you likely know last month’s newsletter was “Corona Virus Happenstance or Engineered”. I don’t say this in a boastful way or to infer I have some prophetic attributes but, the United States Government is now saying that the virus whether intentional or accidental likely came from a “Chinese biological weapons lab” ergo the very reasoning why, as for China much of this remains shrouded in secrecy.  Will there be yet another deadly virus? It defies logic to think otherwise.
I have never been a prepper nor a survivalist. If anything, I have more of the heart and the vestiges of being a survivalist than a prepper. I try and buttress my personal and professional standing with the notion of embracing simplicity and invariably relying on bullets, beans, and band-aids more than anything else, when necessary.  I have never been a doomist or an alarmist. Stores are resorting to minimizing the numbers of people in a store at any given time, rationing and limiting items for purchase, etc. The preppers are viewing this mockery with skepticism, nervous glee, and I told you so.  In times like this, we have all been awakened by the consequences of hoarding. There is little doubt that there may soon be another catastrophic disruption in our life. The fact that it just occurred makes the vitality of yet another disruption even more likely.

In Atlanta, we have an infrequent weather anomaly whereas, the worst of scenarios may create a disruption in our travel patterns for 48 to 72 hours but not much more. So, the hardships we have experienced from a historical perspective have been minor and few and far between. But this one with the CoVid-19 virus has been universally crippling and long-lasting. Many of these reverberations will have an extended shelf-life.  And, although I will reserve much of my criticisms to extremist of any kind, I want to couch my comments with prudence. I may be a survivalist but, not a prepper. I think it makes sense as a survivalist which is steeped and instilled in innatism. For instance, we could all embrace these qualities:

Of course, that is the basic category. My add-to list would include:

When you do not have access to radio and TV and there is a significant void in communication the mind will be difficult to placate. By way of example when I was sent to New Orleans during Katrina the city’s inhabitants had been mostly forced to evacuate the city. The entire sewer system had contaminated the water supply and had become a part of the standing water which had totally enveloped the various Parishes. Any information that came via radio or TV stations came from cities elsewhere. There were way too many “stories” about bodies floating, stores being looted, burned, etc. It’s not to say there was not some of that but, all those weeks there I never saw a body in the water. I did learn of the Danziger Bridge Shooting where a family of four unarmed citizens was fired on by the police, killing two. In fact, that was my biggest fear, that of being shot by the police or national guardsmen. Fear is almost incomprehensible but it is imperative to ensure its proper management. -Jimmy W. Mercer