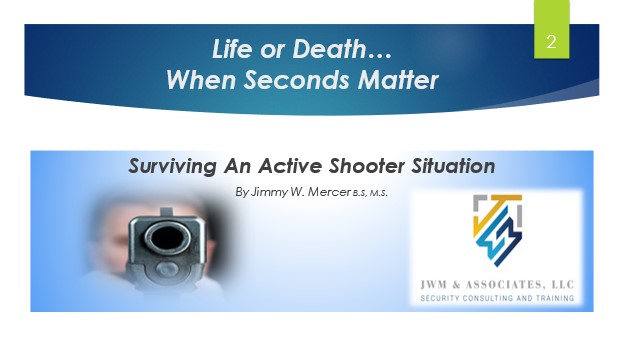 The Harvest venue massacre in Las Vegas tragically occurred within proximity of the Mandalay Bay Hotel this past October three years ago. It’s often a challenge for Academicians, Clinicians, and Threat Managers to intellectualize with precision through troubled people’s criminal and threatening behavior. However, this event remains both a marvel and somewhat mysterious.  It’s emotionally discombobulating to fully comprehend how 11 minutes of mayhem changed so many lives forever. Where 58 people died and more than 800 injured.

Murders are invariably one of the crimes with the highest arrest stats, which results in more favorable resolutions than most all other Part 1 crimes. Highest because, more times than not, there is a nexus, a relationship of sorts between the shooter and the victim.

Stephen Paddock was sixty-four years old and already older than most would-be spree killers. Like many other people, he had multiple stressors in his life, but none seemed overly remarkable. He had recently lost his pilot’s license, and things once important in his leisure life, his interest had begun to wane.

Stephen Paddock began acquiring ammo and gun acquisitions about a year before the Mandalay Bay incident. He seemingly immersed himself in searching the internet regarding site selection, police tactics, and response while learning about ballistics. The irony here his target selection was not driven by a grievance. But it was the place of his excellent choosing one that he could exact the carnage, and he may have envisioned, his day of infamy. He may have chosen this hotel for its strategic location, fixed elevated platformed positions used for many active shooters, such as the 1963 Lee Harvey Oswald perch in the Texas School Book Depository in the JFK Assassination. Again in the 1966 University of Texas Towers massacre and the 1973 Mark Essex, Howard Johnsons shooting in New Orleans.

Even after this time Paddocks, motive(s) remains unclear and subject to speculation. Although seemingly entranced about what Paddock intended to do and become, there was little to no leakage. Unlike all too many criminals, Paddock didn’t intentionally or unintentionally telegraphed his intentions. There was some obvious freeing of end-of-life tethers, but the hind site is 2020. Paddock’s friends were few and far between. His use of social media was almost non-existent. But for his prolific gambling, he was a loner. As such, the dots remained mostly unconnected.

A cursory exam of Paddock’s pathology seems unremarkable. However, I believe we missed the cultivation of a sociopath. How else could someone go about their daily routine as if nothing foreboding was percolating in that cranium of his? There must have been many times his notions could have been interrupted or even aborted, had he wanted to. The planning and rehearsal phase was not abbreviated but long-lasting and not contemporary. Paddock was meticulous in his planning with his tenaciousness in getting the guns, ammo equipment, and supplies to accomplish his feat.  He also knew the finality of it all; he knew how it was going to end, and for the depraved mind of Stephen Paddock, who thought he was justified in his actions. At last, he could appease his insatiable appetite for vengeance.

When we think about the Id, Ego, and Superego, we know our ID fulfills desires; it’s a cauldron of seething excitations. Perhaps his was overdeveloped while the ego and super-ego were inferior and unsustainable towards keeping him in check and insulating one from acting out on some hideous desire. In battle, we train to neutralize our enemy to avoid our elimination. But when we can dehumanize a life as the sociopath does, anything goes. When we lose our ability to empathize, we become emotionally detached, dangerously aloof, and non-caring.

Are these examples of Workplace Violence? Sometimes it seems like we are putting round pegs in square holes. I thought that about the 2009 Fort Hood Texas Soldier shootings when it was labeled Workplace Violence in what many thought may have been an attempt to avoid classification of terrorism. According to OSHA, Workplace Violence is any act or threat of physical violence, harassment, intimidation, or other threatening disruptive behavior that occurs at the worksite. It ranges from threats and verbal abuse to physical assaults and even homicide. It can affect and involve employees, clients, customers, and visitors.

Jimmy Mercer is a Security Consultant and Trainer with more than 45 years of Security experience in the Public, Corporate and Private sectors. He has created and customized more than 60 Instructor or Virtual Based Training programs.

Posted in Threat Blog
← When the Stuff Hits the FanHELP WANTED: Atlanta Seeks Civilian Core…Do You Fit the Bill? →